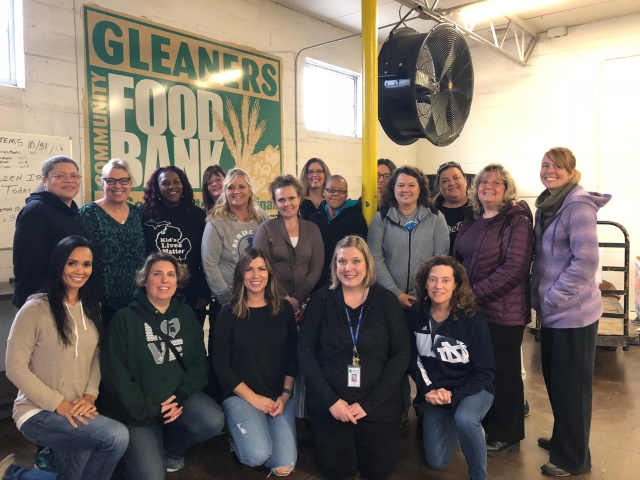 Staff from the Oakland Schools Finance and Medicaid teams took some time out of their busy workday schedules last week to help those in need.

On Wednesday, Nov. 7, staff headed over to Gleaners Community Food Bank in Pontiac to pack food and donate money to the cause. According to Michelle Saunders, executive director of Financial Services, the 18 Oakland Schools employees who volunteered to participate were able to package enough food to impact the lives of 5,900 local residents in need, as well as donate funds which will be used to purchase 150 gallons of milk for Gleaners’ clients.

Gleaners is a food bank headquartered in Detroit that has a variety of distribution centers around southeast Michigan, including one in Pontiac. In 2017, Gleaners distributed more than 42 million pounds of food to neighbors in need. On average, Gleaners distributes 96,000 meals each day including providing nourishing food and nutrition education to 171,000 children a year. Every dollar donated provides three meals and 97 cents of every donated dollar goes to food and food programs.

Saunders explained the idea to volunteer at Gleaners came from a mini “retreat” held by the two teams this past year. At the retreat, the group holds a staff meeting, conducts organization business and then participates in a team-building activity. For the last two years, the group has decided the team-building activity should be centered around helping out the local community. Last year, staff made cookie trays and delivered them to local fire and police stations.

“I surveyed the team to see what everyone wanted to do for team building this year and the overwhelming response was to volunteer at Gleaners,” said Saunders. “We realize we lead rather privileged lives and we could spend time together having fun, working as a team and helping others at the same time.”

Sarah Davis is the communications specialist at Oakland Schools.

← The Bee is back!
Employee Focus: Mary Beth VanBuskirk (OSTC-NW) →