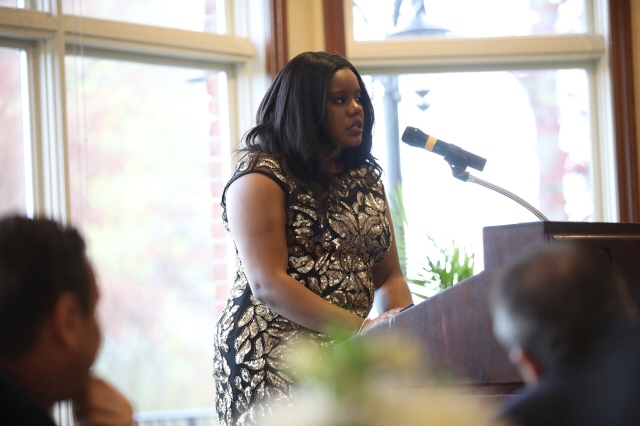 There are probably few cooler job titles out there than cyber defense threat analyst.

Yet that’s exactly the profession a recent graduate of Oakland Schools Technical Campus (OSTC) – Southeast finds herself excelling at.

Zilphia Martin is a 2012 graduate of Berkley High School, who in 2011 made the life-changing decision to begin taking half of her classes at OSTC-Southeast. With a particular interest in PC troubleshooting and repair, plus networking, Martin decided to join what was then called the Business Management, Marketing and Technology team (BMMT) at OSTC (now known as ITEAM.).

Once she did, she said her world expanded. Martin was able to obtain several certifications a student would normally have to wait to garner until after high school graduation, costing additional money and time, all while she was at OSTC – for free.

“These are industry-recognized certifications, not watered down,” explained Martin. “These are things any employer would look for. It would very easily get you in to (at least) a helpdesk position.”

Martin said she later saw a difference even within her own job where she was a receptionist. She said one day something happened with the server where she worked and her employers were struggling to fix it. Martin said she knew how to help and was able to assist in fixing the problem. Shortly thereafter, she was promoted.

“Without the OSTC education under my belt, it would not have been possible (to be promoted),” she said.

Martin pointed out learning at one of Oakland Schools’ four OSTC campuses is different than in a traditional setting where most education happens via lecture. She added the teachers providing the material have active knowledge of their subject matter.

“You are in a setting where you are able to work hands-on with technology and work with industry experts well before you are even in your career,” she said.

The BMMT cluster also had a “social responsibility” component, said Martin, which thoroughly emphasized the connection between what she was learning with the real world.

BMMT fundraised for the Muscular Dystrophy Association, and in order to do that, the students would often have to work with local businesses to ensure success.

“It was great because it was something that was non-technical and we truly felt good about what we got to create,” said Martin. “It really helped with adding that extra layer (of learning).”

Martin now works for Secure 24 in Southfield as a cyber defense threat analyst making sure the company’s cyber security system is impenetrable. An avid hiker, Martin balances her exercise with a healthy dose of baking brownies, cookies, cupcakes and breads.

But the most important takeaway Martin says she learned from attending OSTC? Having confidence.

“You become comfortable with failing and trying again,” she said. “When you do complete something, you feel accomplished.”

Sarah Davis is a communications specialist with Oakland Schools. You can reach her at sarah.davis@oakland.k12.mi.us.