On May 5, 2015, Michigan voters will head to the polls to vote on Proposal 1- a statewide ballot initiative that will raise funds to improve Michigan’s roads and bridges, and schools. 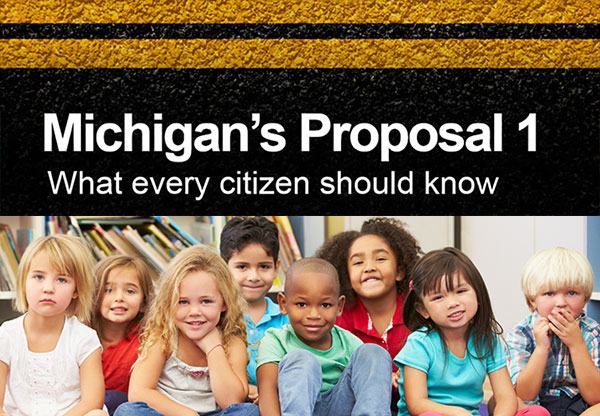 2. Fix structural problems with our roads and bridges

WHAT IS PROPOSAL 1? Proposal 1 asks Michigan voters to change how the state pays for roads and bridges. It also provides more secure funding for schools and local communities. It does this primarily through a 1 cent state sales tax increase.

WHAT HAPPENS IF VOTERS APPROVE IT? The sales tax would increase to 7 percent on Oct. 1, 2015. (Sales tax is not charged on groceries or prescriptions, and would not be charged on gasoline.) There would be an additional $1.2 billion for funding our roads, bridges and transportation programs. This revenue would be generated by removing the sales tax paid at the pump and replaced with a wholesale tax that generates a similar amount. All taxes paid at the pump are constitutionally guaranteed to go to transportation programs while the vast majority of sales tax would go to schools and local governments.

WHY DOES PROPOSAL 1 INVOLVE SCHOOLS? A large portion of the sales tax on fuel is dedicated to school funding. Proposal 1 will prevent the loss of revenue to schools when the sales tax is removed from the gas we buy at the pump. The 1 cent state sales tax increase will generate $300 million more for K-12 education. More important is the constitutional guarantee the School Aid Fund can only go to K-12 and community colleges.

WHAT HAPPENS TO THE ROADS IF PROPOSAL 1 FAILS? Michigan ranks 50th in per capita spending for roads and bridges. More than one of every four bridges in Michigan needs to be repaired, improved or replaced. There is not enough money available without Proposal 1 to get ahead of expected additional deterioration, experts say. If Proposal 1 is not approved, Michigan’s roads and bridges will continue to decline at a rapid rate. There is no backup plan approved by the Legislature at this time. WATCH: Proposal 1 ROAD SAFETY Info VIDEO

It’s Not Too Late To Master The Basics of Proposal 1 (Bridge Magazine; The Center for Michigan)

Proposal 1 May Be Complicated, but Has Major Implications for Schools (School News Network) 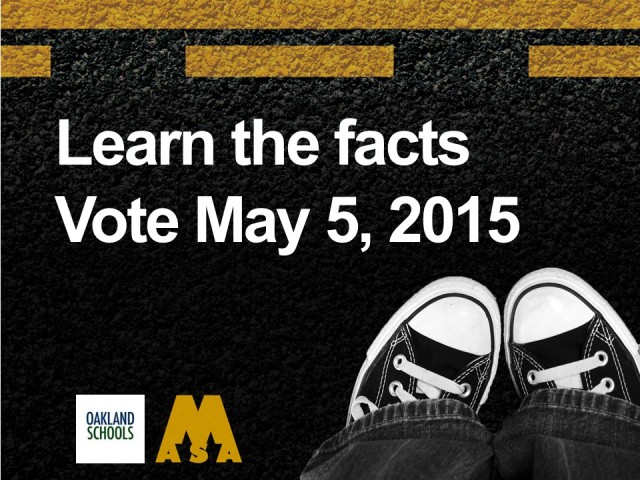 AND… MORE about OAKLAND SCHOOLS